Have you ever heard about the healing properties of Amber? In my life, I have heard multiple times many different stories about how people are curing themselves with the use of amber or how efficiently it corresponds with their meditation routine. Frankly speaking, before I was always somehow skeptical about the power of this gemstone, until the moment I started dealing with amber on my own. When I was little I remember my great-grandma saying “if you wear amber jewelry you will never have a headache”. It is hard to believe, but now I know she was somehow right. So to what extend the amber properties are true and how did people discover its beneficial side? In this article, I will try to answer this question by using some examples based on the findings from the history and nowadays and I will make sure to add my own remarks and observations.

To begin with, it is worth to mention that the whole concept and ideology of Baltic amber has arisen over the centuries in many different cultures and continents. This has contributed to the development of some legends and myths about healing properties and the beneficial impact of amber on the human body.  How is Baltic amber truly linked to various health benefits?

Amber stone artifacts and jewelry have been found in many places. The oldest amber artifacts are dating from 11,000 to 9000 B.C. (Paleolithic period). Paleolithic humans saw it as a material for protecting amulets, talismans, and later for jewelry and beauty purposes as well. Others made the amber figurines of animals or divinity made especially for worship purposes. For example among the Etruscans and the early Latins, amber was carved into jewelry elements and amuletic images, including monkeys, horses, nude females, and heraldic compositions of humans and animals. Hence we can conclude that the oldest and most common use was for adornment.

Raw amber was of greater interest in ancient Greece and Rome. In ancient times Amber was connected with pine trees and the sun. It emits a smell reminiscent of pine when heated, and most likely did originate from a now-extinct species of the tree. It was known amongst the ancient Greeks as “Elektron” meaning the sun/energy, no doubt because of its warm sparkling orange color. The Ancients noticed that amber rubbed against the fur catches dust. That must have been humans’ first experience with electricity. Early works of Hippocrates (ca. 460-370 BC) are reflecting the amber healing properties. He described amber effects and methods of amber applications which were used later by scientists until 15th century AD. Furthermore, in Ancient Rome Callistratus described multiple cases of observations where amber powder plays a crucial role in healing diseases connected with ears, mouth, throat as well as problems with asthma, epilepsy, rheumatism, or stomach distress.

The benefits of amber are noticeable if the resin is in direct contact with the skin. Amber has overtones of warmth, solidity and it has a strong connection with the natural world, hence it is believed that this resin attracts luck and protects against negative energy. Amber can also work as a remedy for stress. In the XXI st century it is a number one problem of those who live the life like it is a fast track, are constantly in rush, got plenty of tasks at work and basically, their agenda stays filled all the time. Rubbing on the raw pieces of amber gives a sense of balance and unblocks the energy flow. It is a powerful cleaner for body, mind, and soul – as a notorious user of amber I highly recommend it – it seriously helps, I have noticed it especially when I work with my bracelets.

When marveling at the beauty of amber we tend to forget about its chemical composition. This can be identified by employing Infrared Spectroscopy (IRS). Baltic amber is also the only kind of amber that contains succinic acid in about 3 to 8%. Shortly speaking the succinic acid is a naturally healing immune agent. It is considered as a tranquilizer and has antiseptic properties. In fact, due to the presence of succinic acid, Baltic amber acts as a biostimulator. Specialists in natural medicine believe, for example, that each of us is surrounded by an electromagnetic field, hence as a result of stress or illness, there is an excess of positive charges. Amber generates static energy. However, our body functions properly when there is a balance between positive and negative charges thus while rubbing on amber it is producing negative charges that are friendly to us. So to put it more simply: positive ions (human body) +  negative ions (amber) = balance.

It is important to underscore that amber in its chemical composition consists of elements that are on the regular base highly necessary for the human body: iodine, iron, magnesium, calcium, phosphorus, zinc, cobalt, barium and aluminum.

Besides the chemical properties of amber that have a certain impact on our body, there is something else that makes us feel calm and relaxed. Foremost, the color – specifically the honey-colored depths and the structure of Baltic amber contributes to our perception of this fossilized resin. Doesn’t the air bubbles, a small pine needle or tiny insect inclusions make us stuck in a moment and wonder about the past? I am sure that every amber lover felt once in a lifetime in a moment of suspension by wondering and admiring the beautiful and glistening surface of amber and its inside treasures from the time the amber was formed. Everything that can be seen with the naked eye gives an additional value to the experience, even if it’s only looking.

Until now I have discussed the metaphysical properties and chemical content of amber. Notwithstanding, amber properties can be spiritually well noticeable. So what about amber’s properties in practice?

Last but not least thing to bring up in this article is a matter of meditation. If most of the amber properties sound appealing to you, you should definitely try to enrich your meditation ritual with amber lumps. Meditation with amber gives an unexpected effect of balance between mind and heart. By holding the raw piece of amber in cupped hands or simply rubbing on it we can find a sense of inner peace, and a way to understand things better. In fact, rubbing on amber causes the emission of rich, calming, pine-scented aroma. While focusing on the rubbing movement we tend to forget about stress and anxiety. To use amber in this way it is necessary to create a proper space which helps you to relax and to reach a state of mental quiet. This method also helps to balance the emotions, clears the mind, and helps to develop patience and wisdom. The true virtues, healing, and curing properties of amber are present and noticeable as long as you personally believe in it and feel the comforting feeling. 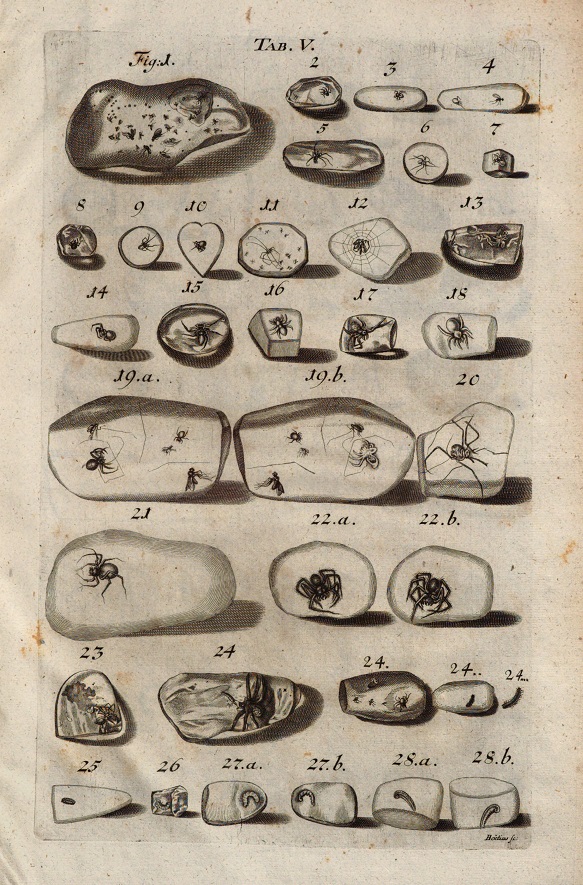 For me, the best way to profit from the energy of amber is to wear it in the form of jewelry. Only this way it is possible to find the inner balance and peace while admiring the beauty of color or texture of amber and while experiencing the warmth of this fossil directly on the skin. After reading it just make sure that you equip yourself with an alluring and genuine piece of amber jewelry.

B. Kosmowska-Ceranowicz, Amber in Poland and in the World, Warsaw 2017